Toronto is host to many annual dancing festivals in which dance promoters invite top dancers from around the world to showcase performances and conduct extensive dance workshops. These festivals include the  Canada Salsa Congress and the Toronto International Flamenco Festival that take place in October, the Toronto Tango Festival that takes place in June, and the  Toronto Swing Dance Championships that take place in July.

These festivals are a great way for dancers of all levels to learn new material and meet other dance enthusiasts during the milder months of the year, but what are snow-bound Torontonians to do during the frigid winter months?

To the rescue is Stephanie Gurnon of Go Dance Mambo who plans to bring the steamiest dance festival of all to Toronto this February: the first Annual Toronto Bachata Fesital.

Gurnon, also known as “Salsasteph,” was one of the earlier promoters of Salsa dancing in Toronto, having travelled to New York and other cities to bring new information back to Toronto. Thanks to Gurnon and other Salsa promoters, the burgeoning Toronto salsa scene can now fill every day of the week of the enthusiast’s social agenda with a variety of dates and venues.

Gurnon herself runs a very popular salsa social every Sunday at the Dovercourt House where she, like most other salsa hosts, plays the occasional Bachata rhythm to give her dancers an enjoyable break from the more frenetic salsa. Often danced in the same venues as salsa, Bachata is stepping up as a mainstream social dance, and with Bachata festivals becoming popular all over the US and Europe, Gurnon is excited to be the first to bring this kind of event to Canada.

The first Annual Toronto Bachata Festival will take place February 19-21, 2010 . Most events are taking place at Dovercourt House, with the Gala Party being at the Lithuanian house.  The festival will include daily workshops, nightly dance parties, sexy performances, and a Jack and Jill competition where competitors are randomly selected a partner to dance with.

Perhaps the sultry and sensuous Bachata is the next wave of dancing fever to hit our city … and if our winter is anything like it was last year, it’s about time!

Get your tickets before December 15, 2009 to get your full weekend pass for $125 (price at the door will be $160). Fifty percent of the proceeds from the Festival will go to the Boys and Girls Club of Canada, a leading provider of quality programs to 200,000 young people and their families each year. 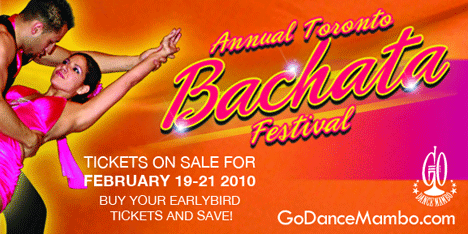