For the past two decades, the culture of hip hop has grown exponentially, becoming a global force. Youth today are growing with the evolution of hip hop, and the industry has shown enormous growth with the widespread coverage of hip hop dancers on hit TV shows such as “America’s Best Dance Crew” and “So You Think You Can Dance”.

Nu-Lite Entertainment and Fuel Productions have come together to honour and celebrate the growing hip hop dance industry by hosting a global dance competition called The Beat Down Hip Hop Dance Competition (“The Beat Down”).

The Beat Down is a group based competition open to all ages, gender and level. It is one of the largest and most popular respected hip-hop dance competition of its kind in Toronto, Canada. Dancers from all over the world audition every year with the hope to become North America’s best, but only 10 teams will go on to compete live on stage for the title and grand prize of $2000. This year’s event will be held on Saturday August 10, 2013 at the Ryerson Theatre. 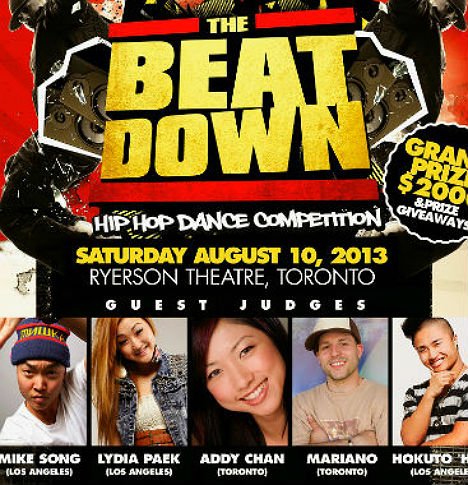