With Toronto already home to various popular Salsa, Bachata, Flamenco, and Swing festivals, the folks at Brazil Dance World have decided it’s time to expose Toronto to yet another style of social dance ..  Brazilian dance!

Brazilian Zouk is already popular at many Bachata dance festivals, and has a growing following in Toronto. Other Brazilian dances featured during the weekend congress, taking place April 29, 30, and May 1st, 2011, will include Samba no Pé, Samba de Gafieira, Lambada, Forró, Brazilian Bolero, Soltinho, Afro-Brazilian, Axé and Capoeira.

There will be daily workshops, nightly dance parties, and shows by international Brazilian dance companies including the breathtaking Kadu Pires and Larissa Thayane of Australia (see video below).  Kadu an Larisa are the most famous and decorated Zouk and Samba de Gafieira performers and instructors in the world.

Other local companies – Brazil Dance World, The Dance Migration, Newton Moraes Dance Theatre and Axé Capoeira – will perform at the congress to display their talents. The Brazilian Beat Canada Dance Congress will also feature Samba Quebec and the Brazilian dance companies Bamberg Dance Company and Forró Cabrueira, in a total of 13 international guests.

With instructors and performers such as these on the agenda,  Brazilian Beat is sure to catapult Toronto towards yet another world of social dance!

Workshops will be offered in levels from beginner to advanced during the three day congress (daytime) and instructed by the best dance professionals, totalling 13 hours. The dance styles will be Samba no Pé, Samba de Gafieira, Zouk-Lambada, Afro-Brazilian and Forró. The congress will host parties allowing the participants to practice what they have learned during the workshops. DJs will play Brazilian music in the ballroom while the guest teachers share their experience with the attendees. In addition, the performances will display all Brazilian dance styles mentioned above, plus Soltinho (Brazilian Swing), Bolero, Capoeira and Afro-Brazilian.

A dance contest will take place on the last day in  two categories: professional and amateur. The style  of dance for the competition is Samba no Pé (Samba Solo), the most popular of Brazilian dance.

The tickets are limited and should be bought in advance.  Prices range between 15  and 220 dollars, according to the type and quantity of events purchased. Some tickets will be sold at  the door, but are  subject to availability.

For anyone looking to add a little magic to their current dance style,  or wanting to simply increase their social dancing repertoire, this  is one Congress not to miss.  Are you ready to dance to the Brazilian Beat?

About Kadu and Larissa

Kadu Pires and Larissa Thayane are professional Zouk Lambada and Samba de Gafieira dancers.  Kadu earned the reputation of being Sao Paulo’s “youngest professional dancer”  at the age of 15. Later he met Larissa while training at Jimmy de Oliveira’s Dance Academy in Rio de Janeiro. They eventually moved to Australia to teach with Rio Rhythmics, Austrailia’s largest Latin dance academy and the centre for Samba de Gaffeira and Zouk-Lambada in the Asia Pacific Region.  They are now internationally recognized performers of the highest caliber and have performed at over 40 world class festivals and congresses.

An entire weekend where you can explore the movements and music of Brazilian dances through a series of workshops, dance parties, competition and wonderful performances.
For anyone looking to add a little magic to their current dance style,  or wanting to simply increase their social dancing repetoire, this is one Congress not too miss. Are you ready to dance to the Brazilian Beat?
SHARE THIS EVENT : 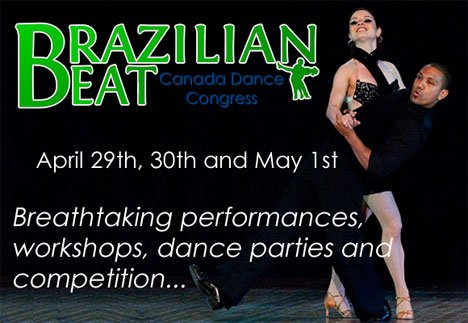