Celebrate spring by dancing to Brazilian rhythms at the second Annual Brazilian Beat Canada Dance Congress!  This festival is the biggest celebration of Brazilian dance in Canada.

The Congress is open to anyone who would like to learn and experience the different styles of Brazilian Dance. With a focus on the Brazilian Social dance styles, there will be seminars and workshops given by world renowned instructors during the day. Evening will bring breathtaking performances from international Brazilian dance companies in Samba no Pé, Samba de Gafieira, Zouk, Lambada, Forró, Brazilian Bolero, Afro-Brazilian, Afoxé, Samba Reggae and Capoeira.

Prices range from $20 for an evening to $225 for all workshops and events.   An event not to be missed!

The event will close on Sunday night with Zouk Dance competition for both professional and amateur dancers.  Contestants must enroll in advance. 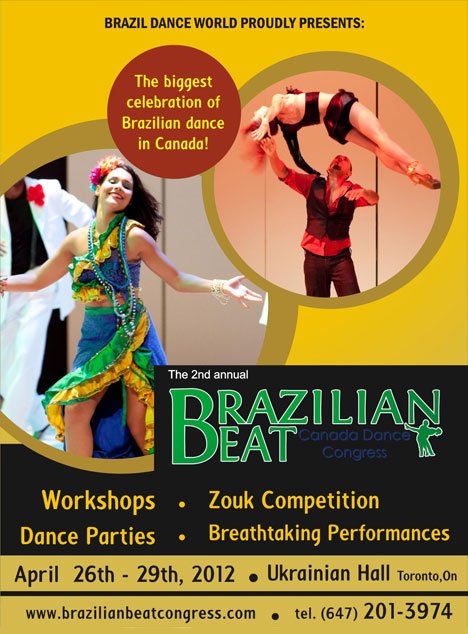 Two Hours of Fitness with the Queens of Dance on January 26, 2013