The Ohio Star Ball, televised yearly on PBS as “America’s Ballroom Challenge,” is probably the largest and most prestigious ballroom dance competition in North America. Running now for 33 years, this “Super Bowl of Dancesport”  takes place in Columbus, Ohio, and lasts an entire week, filing three different hotels with hundreds  of competitors and spectators.

A significant portion of this competition is the Pro-Am category, where professional dance instructors compete with their Amateur students.  The highlight of this Pro-Am competition is the  “World Super Series Team Match,” now running 11 years, where Pro-Am teams from six different regions in the USA compete against each other to be named the World Pro-Am Dancesport Series Top Team.

In terms of regions, Canada was split up into multiple regions and absorbed into the US. However, thanks to the hard work of  dancer Scott Ruddick from Burlington, Canada had been recently added as its own region, Region #7,  despite doubts by many that Canada could support its own region.  Scott had hoped that Canada could place somewhere in the middle and earn a respectable showing. Little did he know that, in a very short time, Canada would far exceed  his  humble expectations.  The following is in his own words what he experienced last week when the results were announced:

“Standing there with my team as they started announcing the results of the team match, I know I wasn’t alone in my thought of “please just don’t have us be last place, just not last place”. Then they called the 7th place. And it wasn’t us. Nervous and excited we stood united as they went through 6th, 5th, and 4th. At this point the team looked around at each other and our eyes told us we were all thinking the same thing. Wow, Canada is in the top three.

Third was called out. Again it was not us. Such a victory, to be in the top two teams. The Region people weren’t sure could even build a team was in the top two! Finally after dragging it out for dramatic effect, the runners-up were announced. Leaving just us, Region 7 (Team Canada)  left.

We were victorious. The number one Region in the World Super Series Team Match for 2010. For me, the eruption of our team’s celebratory cheer (which likely was loud enough to have been heard back in Canada) was the greatest moment at Ohio.”

Congratulations to the members of Team Canada for winning the Pro-Am Team match of the 2010 Ohio Star Ball!

Well that proves it, we have some amazing dancers in Canada, many of them in the GTA! If you would like to participate in Pro-Amateur competitions, you can find the local winning Pro’s here: 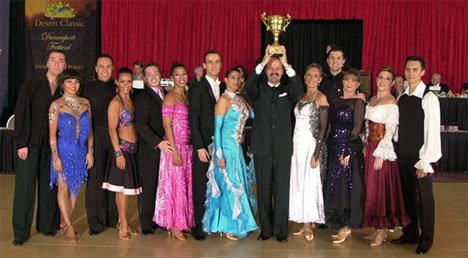 5 Tips for Becoming a Better Dancer