The CIBC IIFA Bollywood Moves Dance Competition will award one lucky man and one lucky woman the opportunity to perform on stage at the upcoming 2011 International Indian Film Academy Awards to be held in Toronto on June 25, 2011.

Earlier this year, CIBC invited Canadians to submit videos of themselves performing their best Bollywood moves for the IIFA Bollywood Moves Dance Competition.  Ten contestants have made it to the top and will be judged on Saturday June 11, 2011 at Yonge and Dundas Square (7-9pm) on the basis of technical and creative merit, level of complexity, projection and over all performance.

Congratulations to the finalists – check clips from their audition videos above!

According to  Mitul Kadakia, Manager of Shiamak Davar International Toronto,  narrowing down the top 10 finalists “has not been an easy process. The competition has been tough and the top ten selected are definitely talented performers.”

The winning pair will go on to perform at the IIFA awards later this month, along side star performers and Shiamak Davar’s professional dance troupe. They will be trained and choreographed by Shiamak Davar himself.

Learn more about the International Indian Film Academy Awards below: 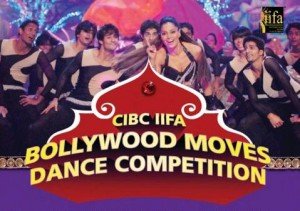