A major study added to the growing evidence that stimulating one’s mind can ward off Alzheimer’s disease and other dementia, much as physical exercise can keep the body fit. Almost no physical activity studied seems to offer any protection against dementia, except for frequent dancing.

This paper by Richard Powers muses about why this might be so. It concludes that intelligence is maintained and improved by activities which require split-second rapid-fire decision making, as opposed to rote memory, or just working on your physical technique.

Powers argues that dancing integrates several brain functions at once, increasing neural pathway connectivity. Dancing simultaneously involves kinesthetic, rational, musical and emotional processes. In particular, it seems that freestyle social dancing is the best kind of dancing for maintaining mental fitness, since it requires a lot of split-second decision-making, especially in the follower role. And the more partners one has the better, as each offers a new opportunity for learning and adjusting.

So dance with as many people as possible in a social setting and you will stay smart longer! Anyone up for Salsa? 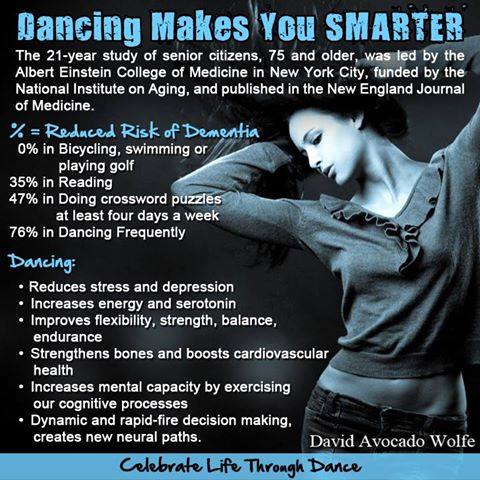 The Power of Dance and Its Impact on Mental Health