Don't Miss >>
An Iconic Journey, A Flamenco Celebration of 35 Years

Esmeralda Enrique Spanish Dance Company (EESDC) celebrates its 35th Anniversary with An Iconic Journey: A Celebration of 35 Years which runs Friday, May 5 to Sunday, May 7 at Fleck Dance Theatre as part of Harbourfront Centre’s NextSteps series.

Artistic Director Esmeralda Enrique marks this important milestone with a presentation that honours EESDC’s significant accomplishments with re-imaginings of past works while it looks to the future with fresh and inventive new creations. Valued for its important pioneering contribution to the development of flamenco in Canada and gorgeous, ferocious, passionate dancing, the Esmeralda Enrique Spanish Dance Company peerlessly stands on the pillars of traditional flamenco singing, dance and music while beautifully balancing classicism with a contemporary aesthetic.

An Iconic Journey showcases the consummate artistry of EESDC with a myriad of flamenco dance styles including farruca, guajira, taranto, zapateado and alegrías.

The exciting program features two world premieres: one from Artistic Director Esmeralda Enrique and one from Ana Morales, an acclaimed choreographer of contemporary flamenco from Seville, Spain that EESDC commissioned for her powerful expression and innovation.

EESDC also revisits and re-imagines works from rarely seen repertoire and audience favourites, giving a multifaceted perspective on the rigorous and rewarding journey of building a company at the forefront of flamenco dance in Canada. EESDC’s powerful dancers – Pamela Briz, Virginia Castro, Paloma Cortés, Esmeralda Enrique, Ilse Gudiño and Noelia La Morocha – are joined by the extraordinary virtuosic singer Manuel Soto of Jerez de la Frontera, Spain (who returns for his seventh production with the company) and musicians Montreal’s Caroline Planté (one of the few female flamenco guitarists in the world who returns for her third appearance with the troupe), Benjamin Barrile (guitar), Derek Gray (percussion) and Rebekah Wolkstein (violin).

The world premiere of ¿Qué Es El Amor?, choreographed by Ana Morales, is a lyrical and high-energy flamenco work for four dancers that features ankle-length skirts, allowing the very precise footwork to be easily seen and uses beautiful mantones (embroidered, fringed shawls) throughout.

Esmeralda Enrique’s world premiere piece for six dancers, Latidos, is inspired by a short work from her 2004 success, Queen of the Gypsies: A Tribute to Carmen Amaya. That piece opened with four dancers seated on cajones (box drums), moving dramatically in this seated position while also producing sounds from the drums. Enrique revisits this concept for her new work, coupling fierce movements and serene moments to different palos (song rhythms). This percussive work includes unusual footwork, cajones, canes and castanets. It reflects the sounds of crashing waves, heartbeats and the passage of time.

Arroyo de la Miel, a guajira choreographed by Esmeralda Enrique, is the name of a town in Spain that translates as Honey Creek. From 2012’s Aguas/Waters, it features Ilse Gudiño and Noelia La Morocha, visually stunning in yellow batas de cola (dress with long ruffled train) and large fans as they conjure a sweet, golden grace, full of light.

Mr. Ogalla also choreographed the taranto Y Después / And Then for 2009’s ¡LORCA!: In Search of Duende. A trio with Virginia Castro, Paloma Cortés and Ilse Gudiño, it speaks to how the labyrinths that time creates vanish. 2013’s Portales sees two pieces revived and reworked. Sevilla Flamenca, an adventurous solo choreographed and performed by Paloma Cortés, evokes new beginnings while Zona Zero features four dancers in a stark and precise farruca originally commissioned from the Spanish choreographer Manuel Betanzos that reflects on the harshness of a truncated dream. In it, the quartet dance with each other and with ordinary chairs that conjure the moment where one phase ends and another begins as well as the obstacles we perceive in our quest for happiness.

And throughout, the excellent musicians and singer Manuel Soto will mesmerize with their thrilling sounds as audiences, who never fail to enthusiastically greet an EESDC presentation, shout ole!! Esmeralda Enrique Spanish Dance Company Story: Just over 35 years ago, a young woman from Texas came to Canada after spending 13 years in Spain perfecting her artistry as a flamenco dancer. She founded her award-winning Esmeralda Spanish Dance Company as well as her school, the Academy of Spanish Dance, in 1982 in Toronto, and thus began her journey of cementing her reputation as Canada’s premiere flamenco artist.

Since then, the Company has developed an ever-expanding repertoire that has earned both critical and popular acclaim. With unique, talented dancers and musicians from Canada and regular guest artists from Spain, the company is recognized for the exceptional level of its productions, receiving three Dora Mavor Moore Awards in addition to numerous nominations over the years, 20 and counting. And NOW Magazine readers voted EESDC Toronto’s Best Dance Company for 2015. Its last three Harbourfront Centre shows were the dazzling Épocas (below)

where Cordoba’s Rafael del Pino “Keko” was nominated for a Dora Award Outstanding Performance, Letters to Spain (2015 – excerpt below)

where Esmeralda Enrique and Juan Ogalla were co-nominated for a Dora Award for Outstanding Choreography as well as the Ensemble for Outstanding Performance, and two Outstanding Sound Design/Composition nods), and De Idas y Vueltas.

The Esmeralda Enrique Spanish Dance Company holds – in perfect balance – tradition and a modern, contemporary aesthetic. Enrique and her exemplary company of dancers capture the passion, mood and soul of traditional and contemporary flamenco, enthralling audiences while bringing forth the contagious excitement and full depth of feeling that the passionate art of flamenco delivers.

Esmeralda Enrique is one of the most celebrated flamenco dance artists in Canada. She reveals in her work a total mastery and love of Spanish classical dance and flamenco. Lauded internationally as a performer, choreographer and teacher, she has received numerous awards. Ms Enrique has been honoured with Dora Mavor Moore Award nominations for Outstanding Performance four times and for Outstanding Choreography in 2009 and 2015. In 2014, the City of Barrie, Ontario dedicated their fifth annual Rhythmfest to Esmeralda in recognition of her contribution to dance in Canada and North America and she was awarded the Pioneers Award in Art and Dance from the Hispanic Canadian Heritage Council. She was the recipient of the inaugural Young Centre for the Performing Arts Dance Award as Senior Artist in 2012, the year that marked the 30th anniversary of both the school and company. She has been named one of the 10 Most Influential Hispanic Canadians and also received the Toronto Hispanic Chamber of Commerce’s Vision Award for Arts and Culture.

Esmeralda grew up in the flamenco tradition, studying dance as a child and was working professionally by the age of 14. She toured North America with the famous company of José Greco and has appeared throughout Europe, the Middle East and Mexico with the distinguished dance companies of Paco Ruíz, Miguel Sandoval, Antonio del Castillo, Sara Lezana and Cristóbal Reyes. She came to Canada in 1981 and founded her company and school soon after.
“Flamenco has shaped my life’s history. It is my great passion. It excites my mind and comforts my spirit,” she says. “It is the language of the soul. Through flamenco I find truth, beauty and goodness.”

The stars that aligned to bring Esmeralda to Toronto forever changed the advancement of flamenco in Toronto and in Canada. Her creativity and passion conveys a true love for the art of flamenco.

Undoubtedly her spirit and energy over the last thirty-five years have helped make flamenco a vibrant, driving force on the Canadian dance landscape and will continue to do so further through her teaching, her company and her legacy.

This event has finished. An Iconic Journey, A Flamenco Celebration of 35 Years starts on

An Iconic Journey, A Flamenco Celebration of 35 Years is scheduled to take place here:


An Iconic Journey, A Flamenco Celebration of 35 Years will feature these dance genres: Click on the link(s) above to find other events of that dance style.
Want more information about this event? Get in touch with the organiser.
Contact Esmeralda Enrique Spanish Dance Company 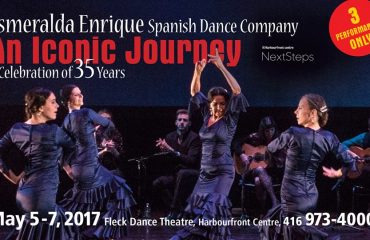 Salsa on the Beach

SALSA LEVELS 1, 2, 3 AND 4 ON TUESDAYS IN MISSISSISAUGA