For the next installment in our Bluespiration Series, we’re tapping into the mind of the always inspiring, sometimes disturbing, ever entertaining, head of the nuttiness that is MezzJelly… It could be none other than Jered Morin!

Jered will be hopping on a plane back to the wilds of Germany shortly after this class… Don’t miss this final chance to catch him while he’s still on this side of the ocean! We promise you some booty-bustin’, brain-breakin’, barrel-o’-laughs classes that are sure to inspire you to new Blues levels!

Only $35 will get you an afternoon of classes with this character!

Location Details:
Classes take place in the Dance Studio located past the gym. Buzz security to let you in and take the elevator to the Lobby (L) on the 4th floor. You’ll often find us hanging out there before class or you can have the concierge direct you to the Studio.

~~~~~~~~~~~~~~~~~~~~~~~~~~~~~
Jered Morin – http://www.jeredmorin.com/
With almost two decades of training and scene building, he has become a featured Instructor, Performer, and Competition Judge, spending the majority of the year traveling to events around the globe. His work as a Choreographer has also been presented before Frankie Manning, at dance competitions, and on theatre stages with large acclaim.

It is through his extensive study of the history, culture, and body movement, that he shares with his students how to create something expressive and – even more so – impressive on the dance floor.

In the classroom, both Leaders and Followers find an equal focus on what they can bring to their dancing to truly capture the Afro-American spirit and joy. From breaking down powerful technique, to coaxing out your personal style, students find that being in a class with Jered brings them to a higher level. 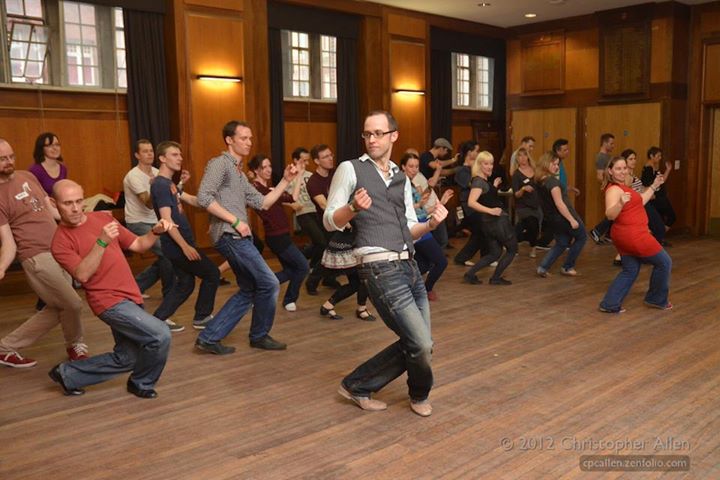 Solo Blues aka The Cuttin' Team