Don't Miss >>
Why Guys Should Learn to Dance Modern Jive

Many men would rather have their teeth pulled than dance. Yet when men discover Modern Jive they are often pleasantly surprised at just how easy it is to learn and how much fun they have doing it.

Modern Jive is partner dancing so when thinking of the many reasons guys should learn to dance where better to hear it than from the horse’s mouth: from a guy who has recently learned to dance after being initially very reluctant to dance at all.

The obvious reasons guys should learn to dance

The first 4 reasons guys should learn to dance modern jive are fairly obvious:

The real reasons guys should learn to dance

Now guys, it’s not that the first 4 reasons are bad ones, they’re very good ones. But according to my savvy guy friends there are important and less “obvious” reasons guys should learn to dance. Guys who can dance know these are the REAL reasons to learn, with slight differences depending on whether you’re a single guy or, as I’ve called them here, a “not single guy.”

The vast majority of women love to dance. They love a guy who dances, who is good at it and willing to lead her on the dance floor. Since most guys won’t or don’t dance for various reasons, single guys need only do the math. It’s very simple and looks something like this:

Modern Jive moves have a very high “looks cool” to difficulty ratio – and women are impressed by modern jive moves like the Swizzle, the Basket, the Manhattan and the Astaire. You will have no trouble learning them after a few lessons, but guys you don’t have to tell the ladies that, do you?

All top 4 reasons apply as does most of what applies to single guys plus a few more. Chances are nearly 100% that your wife or girlfriend loves to dance and wishes you would dance too – or that you would dance with her more often. Modern Jive is partner dancing where the guy leads the dancing. It may sound sexist (it’s not), but many women love being led on the dance floor in a dance (think Dancing With the Stars, Strictly Ballroom, Dirty Dancing and the like). Combine that with the fact modern jive is pretty easy to learn, and can be danced to any 4/4 beat music (pop, alternative, rock standards, rock & roll; from AC/DC, Foreigner, ZZ Top as well as most club-type top 40 hits). In fact modern jive can be danced to pretty much anything.

At the very least the next time you both go to a wedding you will be able to turn many heads by showing off your modern jive steps.

You will be earning a lot of credibility and points by agreeing to go to dance classes with her. Not a one-off class here and there, but regular classes. Remember she wants you to dance with her. Plus modern jive is a great couples activity, and as we’ve already mentioned good exercise. Given all the above you can’t really lose, can you?

And if you’re married you already know that happy wife = happy life!

With thanks to all the guys out there who’ve either learned or are learning to dance for being such inspiration. Keep it up.

Love to dance or would like to learn? Nicky and her team teach fun Modern Jive dance lessons in Toronto. Becoming a sought-after dance partner is easier than you think! For more information, dance videos, workshops, a discount packed newsletter and more go to JiveNationToronto.com 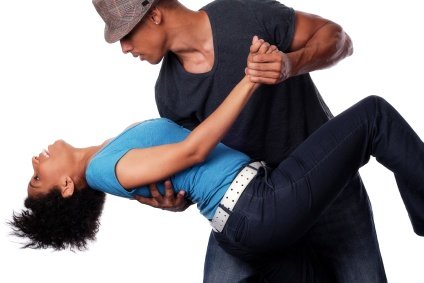 Nicky Heatherington
Nicky Heatherington is the founder of Jive Nation Toronto, which launched modern jive dance classes, workshops and parties in Toronto in response to the need for accessible social partner dancing. Modern Jive is already huge in the UK, New Zealand and Australia.
PREVIOUS

How to Find a Great Dance Teacher

The Power of Dance and Its Impact on Mental Health