This documentary directed by Allan Munro of Toronto details how the the earliest, most sophisticated, and most exuberant form of swing dance, that is, Lindy Hop, suddenly and vibrantly was reborn in Toronto in the 90’s. Watch performances by Janice Hagan, Jeff Healey, Alex Pangman & the Alley Cats, Terry Wilkins & the Swing Gang. Listen to opinions of Alana Hock & Solomon Douglas, Frankie Manning, Mandi Gould & Dan Amores, Peter Rezland, Kathleen Le Roux, and others as they are interviewed by Julia Morgan.

The film was first screened at the Bloor Cinema on June 6, 2005 and covers four years of the community’s growth. Part 1 even has an interview of Frankie Manning and footage of him teaching a workshop in Toronto in 1996 when he was 82 years old!  Frankie Manning (May 26, 1914 – April 27, 2009) was an American dancer, instructor and choreographer, and is considered one of the founding fathers of  the Lindy Hop.

Congratulations to Allan Munro for documenting such a special part of Toronto’s history.  Ask him how you can support his achievement  “Hop to Toronto: Building a swing dance community” here. 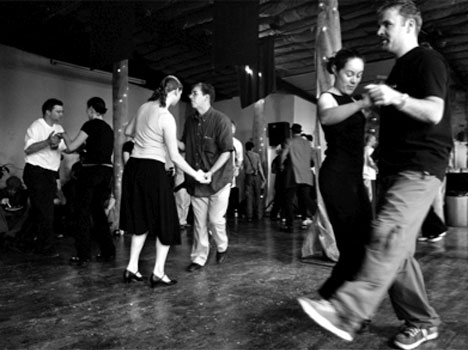 Does Your Child Dance? Claim the Child Fitness Tax Credit