Just a few short years ago the dance costumes that we consider necessary to a performance would have been considered scandalous by society. Explore what it was like to be a dancer in the early 1900’s with Dance Collection Danse’s new exhibit: Maud Allen: An Edwardian Sensation. DNC presents the incredible story of this extraordinary dancer ahead of her time.

The exhibit’s featured artifact is Allan’s 1906 Vision of Salomé costume, which recently spent two years at the
Canadian Conservation Institute in Ottawa receiving treatment in preparation for public display. Shockingly risqué for its time, its rarity and beauty make it a must-see.

Maud Allan’s story reads like a modern-day tabloid … filled with libel suits, murder and tempestuous love affairs. A provocative and charismatic dancer, Toronto-born Allan was renowned for her unique “dance interpretations” and scandalous Salomé costume. At the height of her career, Allan was a dance sensation in Edwardian London where she was the face of collectors’ items ranging from cigarette silks to coffee tins and other memorabilia. She was a contemporary of the forerunners of modern dance: Loie Fuller, Isadora Duncan and Ruth St. Denis, though is the least known artist in this group of dance revolutionaries. She attained international stardom through her tasteful “dance interpretations, ” which she cleverly contrasted with the daring costume she wore in her chef d’œuvre, The Vision of Salomé.

However, her success was short -lived. Two years after she conquered London following her 1908
Palace Theatre debut, Allan’s career began to crumble and she experienced the humiliating fall from international acclaim.

This exhibit reveals the fascinating life and career of Canada’s first international dancing star whose story continues to unfold. 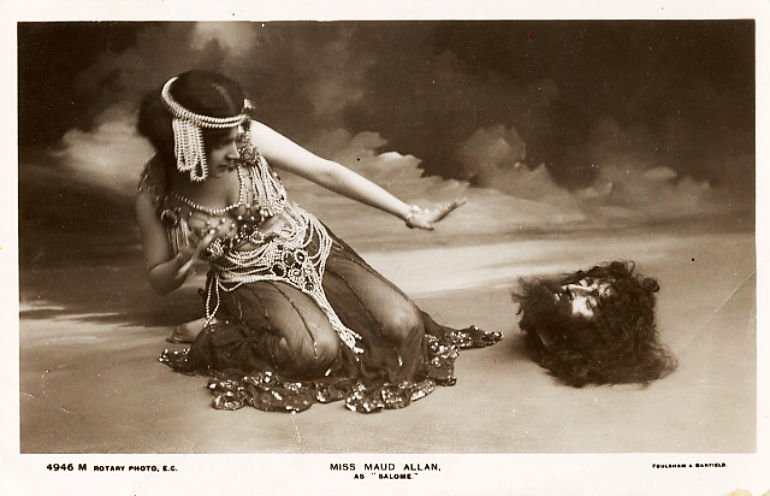