The Third Annual Toronto Bachata Festival will take place February 16-19, 2012 with most events  taking place at the Estonian House.  The festival will include daily workshops, nightly dance parties, sexy performances, and the finals to the Toronto Bachata Competition awarding prizes totaling $2500.

Video from 2010 Bachata Festival below:

A silent auction will help raise money for charity, with 100% of net proceeds going to Windfall Basics affiliated with Toronto shelters.

Like many other Bachata Festivals all over the world, the Toronto Bachata Festival included a Zouk room last year. This was so popular that this year not only will there be a room just for Zouk dancing, but participants will be able to take Zouk workshops from international instructors as well.

Go Dance Mambo, organizer of the Toronto Bachata Festival, is providing discounted advance tickets for sale until midnight February 17, 2012. Get your full weekend pass for $179  (price at the door will be $200). 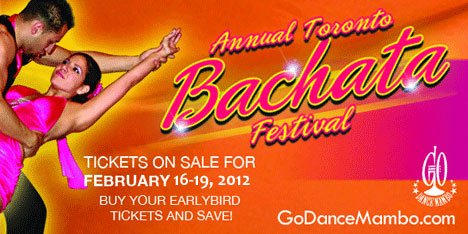